Throughout the year, the Commissioner visits communities across the South Wales force area, meeting with residents and discussing crime and community safety concerns.  Community walkabouts provide the Commissioner with an opportunity to understand how specific crime and safety issues impact on communities and what people feel about the policing response 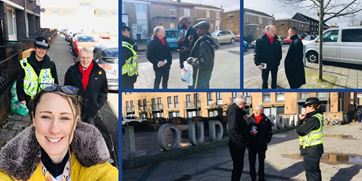 During 2019/20, the Commissioner visited communities in Pontypridd, Maesteg and Butetown, following increased incidents in anti-social behaviour and knife crime.

Feedback captured from residents during the course of the walkabouts included:

The majority of residents who spoke to us were positive about South Wales Police and said that they felt the police “had done a good job” in responding to incidents and felt “happy” with the service they had received.

Following each walkabout, the Commissioner meets with the local neighbourhood policing team to discuss the feedback captured from residents and escalates any issues as appropriate. 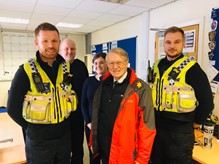 Commissioner thanks volunteers for their contribution to policing

South Wales Police & Crime Commissioner, Alun Michael, has re-appointed Emma Wools to serve as his Deputy for the next three years.

The South Wales Police Youth Trust and Cardiff Metropolitan University are pleased to announce the launch of their new collaborative project, ‘Step in…