Police & Crime Commissioner Alun Michael and his team have moved swiftly to meet his legal obligations for scrutiny and accountability of South Wales Police during the Covid-19 outbreak, as well as supporting the work of police officers staff and volunteers and taking up issues on behalf of the public about the impact of the crisis on the policing of local communities.

“As ever, my role on behalf of the public is to engage with the Chief Constable and his team as both a critical friend and as a partner in making sure that excellence in policing in South Wales achieves a balance between positive engagement with local communities, a robust response to those who break the law and joint action to prevent crime and harm.

“During the unique period we are living through I’m pleased that this balance is being maintained and that we are working closely with local partner agencies especially local government.  Local people across South Wales have responded well to the rules set down by Welsh Government and heeded the advice of police officers and PCSOs – but South Wales Police have been robust in using the powers on the minority who don’t seem to understand that the crisis measures are to protect us all and to enable the NHS to do its work to tackle the pandemic and ultimately save lives.

“Our normal priorities have not been abandoned – so as well as helping in the emergency response South Wales Police have maintained the priority of responding effectively to victims of domestic violence and abuse, the evil associated with County Lines and drug trafficking and the myriad other calls on their time.  And members of my team are maintaining their support for that work,” he added.

But transparent accountability and scrutiny remain a key element of our model of policing.  Government restrictions mean that physical meetings cannot be held, the Commissioner and his Leadership Team have embraced the use of technology to undertake appropriate oversight meetings with Chief Constable Matt Jukes and his Chief Officer team through the use of video conferencing and conference calls to monitor the police response to the Covid-19 crisis and to pose questions submitted by members of the public through a publicised Question & Answer process directly to the Chief Constable.

The work to fulfil the Commissioner’s responsibility for accountability and scrutiny are led by the Commissioner’s Chief Executive, Lee Jones, who has described the way the process has developed and matured in South Wales.  “It is pleasing the extent to which the Chief Constable and those leading on specific aspects of operational policing in South Wales see scrutiny as something that supports them and helps them to ‘get it right’”, he said.

During this public health emergency the Commissioner is in daily contact with the Chief Officers and has established a weekly discussion with the Chief Constable along with Deputy Chief Constable Jeremy Vaughan and Deputy Commissioner Emma Wools to maintain strategic oversight of the South Wales Police response and work with partner agencies including Welsh Government and local councils.

There has been very good liaison with HM Prisons and Probation Service following the Government’s decision to release some prisoners early to enable physical distancing requirements to be met in prison.  Deputy Commissioner Emma Wools has represented the four Commissioners in detailed discussions which have anticipated potential problems and enabled effective local planning on a case-by-case basis. A significant concern for the Commissioner has been the risk of significant hidden harm in terms of Domestic Violence and Abuse during the emergency period and this has been addressed by significant communications work by the Commissioner’s Team and throughout the Force to make it clear that South Wales Police will respond as vigorously during the Covid-19 emergency as at any other time and to publicise the ways people can obtain help. Emma has joined a Welsh Government working group aimed at tackling these issues during the emergency period.

Communications during the emergency are described by the Commissioner as “excellent and comprehensive”.  At the start of the lock-down, operational emergency structures were triggered, both within Policing and through the emergency structures of Welsh Government and Whitehall.  The four Police & Crime Commissioners in Wales have worked with Chief Constables and Welsh Government to ensure that there is ongoing, regular contact at every level.  Regular exchanges include direct discussions with Ministers at the Home Office and Ministry of Justice, the Secretary of State for Wales, Ministers and Officials in Welsh Government as well as virtual meetings with MPs, AMs and Council Leaders and will continue through the emergency and as a return to normality is allowed in the coming months.

The Commissioner has also been working with the Chief Constable to ensure that elected representatives – particularly MPs, AMs and Council Leaders - are kept up to date with the policing response during the Public Health emergency triggered by Covid-19.

This has included accepting invitations to respond to inquiries on specific issues and, for example, participating in a Facebook video interview with Stephen Doughty, MP for Cardiff South & Penarth, to answer questions being posed to him by his constituents around policing the pandemic.

Alun Michael commented :  “We have also engaged positively with the other agencies in the Criminal Justice System, both with the member of the South Wales Criminal Justice Board and through a virtual meeting of the All-Wales Criminal Justice Board which demonstrated the benefits of the detailed work in recent years through which the four Police & Crime Commissioners have made common cause with leaders in other non-devolved agencies – recognising that we all work in a devolved environment and that between us we need to deliver the most effective and efficient criminal justice system for the people of Wales.

“Maximising the use of technology has been absolutely key in our ability to adapt to the workplace challenges posed by the Covid-19 outbreak. We have been innovative in our approach and embraced digital solutions to maintain our normal scrutiny, accountability and transparency processes, providing reassurance to the public that South Wales Police are delivering an efficient and effective service during the crisis. I’m pleased with the way members of my team have adapted to the supportive role that is needed by policing at a time of immense challenge while also maintaining their focus on scrutiny and accountability which is at the heart of the British model of policing in both principle and best practice, as well as a legal requirement.

“That’s how we have been able to pose questions submitted by the public directly to the Chief Constable and his Chief Officer team, with topics ranging from the current restrictions and police powers, through to the use of our Special Constables and volunteers.

“What is very clear, is that the Chief Constable and I are united in our view of how we, in South Wales, should police the Covid-19 crisis, particularly with regard to social distancing rules, with the South Wales model of neighbourhood policing as the cornerstone of our approach.

“That has given me the confidence to appeal to the public to recognise that they don’t need police officers to tell them to obey the rules set down to protect us from the worst potential impact of Covid-19  and to support the Chief Constable’s approach where officers will always aim to ‘engage, explain and educate’ in the first instance.

“From the public engagement it has been pleasing to see the positive response policing has received from the public and the vast majority of people in South Wales are listening to the government advice to stay at home, protect the NHS and save lives.  We’ve also gone out of our way to provide consistent messages across the communities of South Wales with a clear, simple summary of the rules available in a leaflet and on the South Wales Police website.

“Officers have not hesitated to use the new powers robustly when faced with the relatively small number of people who have ignored the rules, because they are exposing themselves and the wider community to risk.  That approach has my full support.

“Throughout this public health emergency, daily contact with the Chief Constable and his team remains critical to ensuring that I am able to keep up to date on arrangements to support our communities while they maintain the operational delivery of daily policing, dealing with the challenges and harm that have not gone away.

“The powerful ethos of co-operation that exists within South Wales has never been more apparent than it is right now, embracing the principles that were set out in the Well-Bing of Future Generations Act, while jointly delivering normal services to our communities and being flexible enough to support each other as we adapt to the daily changes that the pandemic has made necessary.

“I’m proud to acknowledge that South Wales Police has become firmly established as a beacon force in the UK for its contribution to national events and an impressive track record of successfully policing major international events.  At the same time the Force is recognised as a leader in prevention – with our clear emphasis on “early intervention and prompt positive action - and as having not just protected but promoted neighbourhood policing.  It’s this combination of excellence in policing, leadership in prevention and engagement with our local communities that is at the heart of the South Wales Police approach – something that I and the Chief Constable are as one in maintaining through the current time of crisis.

“I am reassured by the way that crucial primary contact points for the public, especially the Public Service Centre (PSC), is continuing to deliver their vital service, whilst ensuring staff are protected by social distancing.

“We achieve more together than we achieve alone and I’m encouraged by the collective effort that is apparent across our communities, with the public, the police and our partners across South Wales all going above and beyond to help tackle this virus and protect our communities.”

Members of the public can submit questions for the Commissioner to put to the Chief Constable via email or telephone:

A rolling list of frequently asked questions from the public will be published on the Commissioner website and updated as new queries emerge: 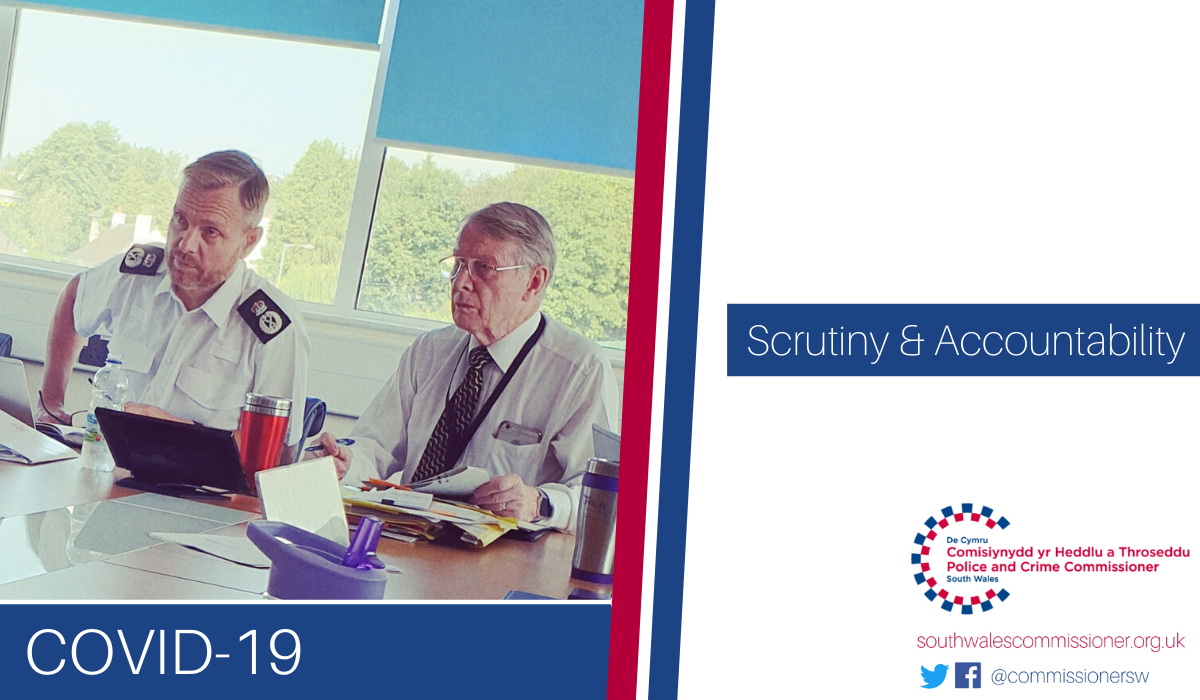