Welcoming the Home Office announcement that South Wales Police will receive more than £273,000 to fund 331 Tasers – one of the largest grants to Forces in England and Wales – Chief Constable Matt Jukes said:

“Equipping officers to be able to protect themselves, their colleagues and, importantly, the public, is a priority. This increase is not in response to a specific threat, but the nature of policing means officers frequently put themselves in harm’s way.

“Additional availability of Taser is one part of our strategy to address the safety of officers and the public. Ensuring officers have appropriate protection is recognition of their vital role in standing between the public and harm, and their daily commitment to doing exactly that.”

Police and Crime Commissioner Alun Michael, who has reviewed and endorsed the planned increase in the number of Taser-trained officers in South Wales, said:

“As part of my role in holding the force to account, I have looked specifically and in depth at the way in which officers in South Wales use Tasers. The result of that scrutiny is set out very clearly in this graphic: 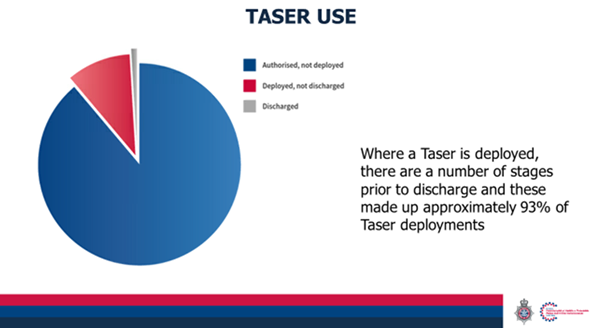 “As this clearly shows, we can be confident in South Wales that the use of Taser by our officers is proportionate and frequently prevents harm both to police officers and to the individual being restrained as well as to members of the public.

“In many cases, the presence of a Taser alone is enough to calm an offender or an individual who is in crisis, and in the vast majority of incidents the Taser is not discharged.

“Despite that evidence of benefit, the deployment of Taser is very carefully controlled, and enormous care is taken when training officers who will carry Taser to ensure that they fully understand their responsibilities.

“I take very seriously my role, which is to ensure that the use of Taser is carefully and responsibly overseen and that Tasers are only used to prevent harm to victims, the wider public, police officers and offenders themselves. That approach is fully understood and supported by the Chief Constable and his team.”