One of the principal responsibilities of the Commissioner is to hold the Chief Constable to account on behalf of the public, for the effective and efficient operation of the police service in South Wales.

The Centre for Public Scrutiny advocates four principles for ‘holding to account’ arrangements to be effective:

The Commissioner and his team work with these principles in mind when fulfilling their oversight and scrutiny role. Further information about our scrutiny arrangements is outlined here

The following meetings support the scrutiny and oversight process:

The Commissioner's Strategic Board 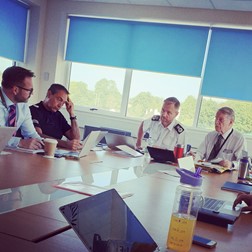 The Commissioner’s Scrutiny & Accountability Board

Chaired by the Deputy Police & Crime Commissioner and attended by the Chief Constable’s Chief Officers, this Board enables in depth scrutiny of particular policing issues, particularly those identified in the Commissioner’s Police & Crime Reduction Plan and the Chief Constable’s associated Delivery Plan.  The meeting also receives updates on key police performance and projects.  Findings are fed through to the Strategic Board.

Chaired independently, this committee provides a joint audit oversight function of South Wales Police and the Commissioner.  Terms of Reference can be found here.

Minutes of the meeting are here.

The Commissioner also monitors South Wales Police progress against recommendations made by Her Majesty’s Inspectorate for Constabulary & Fire and Rescue Services (HMICFRS) and responds to relevant HMICFRS reports.  For more information click here.

To find out more information on the Commissioner’s scrutiny arrangements, contact the Strategic Lead for Scrutiny and Assurance (Hannah Jenkins-Jones) at Hannah.jenkins-jones@south-wales.police.uk .